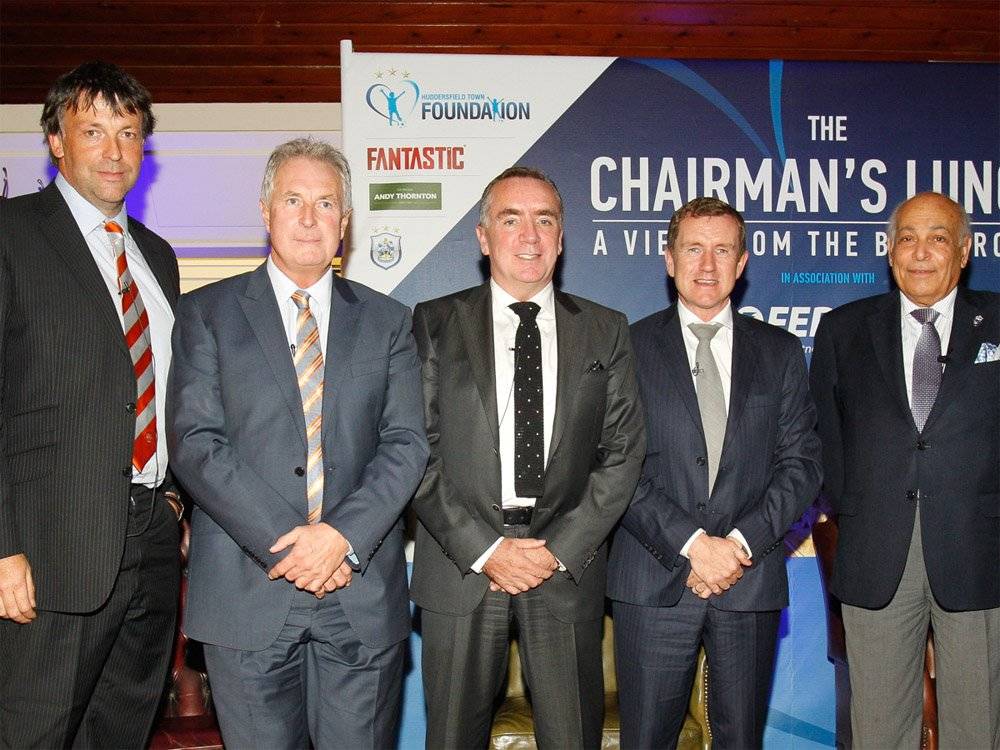 Posted at 12:55h in Trust Fund by townfoundation-admin

Five of English footballâ€™s most influential figures came together in aid of the Town Foundation in an entertaining and insightful afternoon on Friday.

Huddersfield Town Chairman Dean Hoyle was joined at the Cedar Court Hotel by over 150 guests and four fellow top table speakers from the higher echelons of English football to raise money for the charity, which aims to improve the lives of children and young people from the local community.

Hull City owner Dr Assem Allam spoke candidly about his views on English football and the reasons why he got involved with the Tigers, where he move to as a young man and built his business empire.

Blackpool Chairman Karl Oyston called on his familyâ€™s wealth of experience to talk about the difficulties of running a modern-day football club at Championship level.

Ian Ayre, current Chief Executive of Liverpool and former CEO at Huddersfield Town, returned to the town and explained that the issues that face the Reds are not too different to the ones the Terriers will face on a daily basis, as well as giving an insight into Luis Suarezâ€™s summer transfer to Barcelona.Â

Paul Fletcher, former Chief Executive at Burnley and one of the key figures behind the development of the John Smithâ€™s Stadium back in the early nineties, discussed his new venture; a higher education college offering qualifications specific to working in football.

Town Chairman Dean Hoyle completed the five man top table for the question and answer session, discussing the lessons he has learned during his five year tenure at â€˜The Yorkshire Clubâ€™.Â

Huddersfield Townâ€™s Commercial Director Sean Jarvis was the MC on the day and quizzed the five man panel; he said:

â€œI would like to thank every member of the five man panel for giving up their time for such a worthy cause personally and on behalf of the Town Foundation; they are all incredibly busy men, but they made the event possible.

â€œI would also like to thank our event sponsor Ferno; a long-standing supporter of the charity. Their support was vital to the success of our first ever â€˜Chairmanâ€™s Lunchâ€™.

â€œEveryone on the top table answered questions in a very open and honest fashion and gave a rare, captivating insight into the day to day life of an individual running a top-level football club. Iâ€™m sure everyone who attended the afternoon will be glad they did!

â€œMost importantly, the â€˜Chairmanâ€™s Lunchâ€™ raised several thousands of pounds for the charity, which is doing invaluable work across our community through important initiatives like the â€˜Early Kick-Offâ€™ breakfast clubs. Together, we really are making a difference.â€Â Jon Ellis of event sponsor Ferno was in attendance on the day and added:

â€œWhat a fantastic event, a credit to the Town Foundation and everyone who supports such a great cause.â€