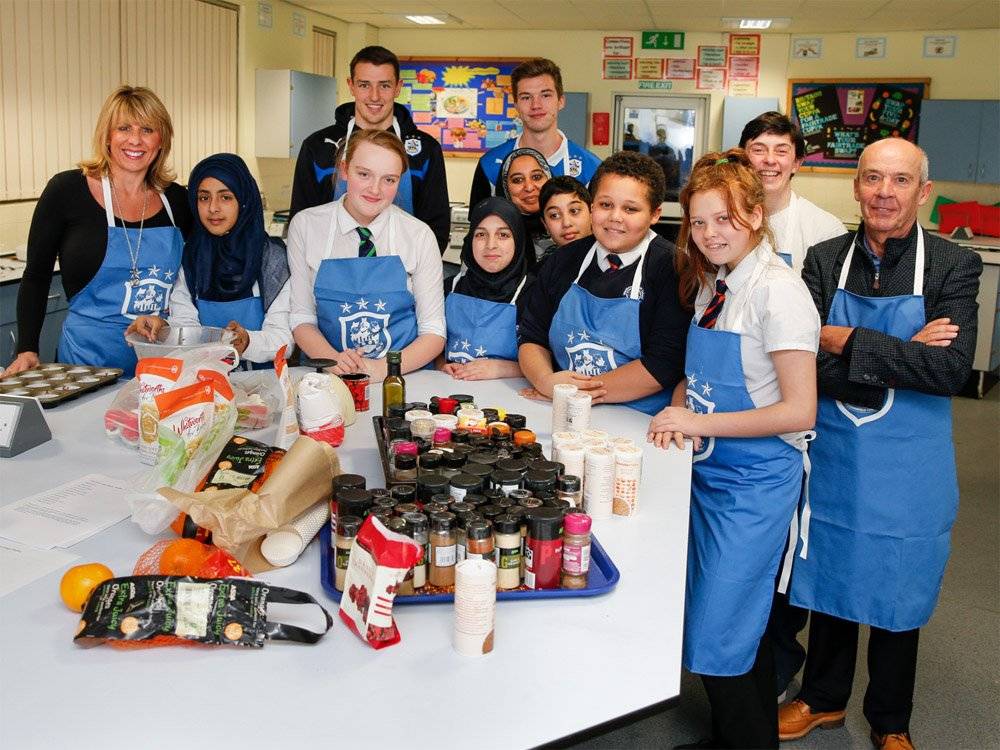 Posted at 15:58h in Trust Fund by townfoundation-admin

As we approach the festive season, it seems fitting that Iâ€™m able to report that another two businesses have made amazing donations to the Town Foundation, the official charity of Huddersfield Town, over the last week.Â

Itâ€™s worth reminding everyone that the Town Foundation is completely self-funded and run as a separate entity to the football club. As such, itâ€™s very important that the charity gets the support of local businesses to allow it to continue the vital work it carries out that makes such a difference to the lives of young people across our region.Â

One of the projects that has been so successful over the last school term has been the new â€˜Extra Time Cookery Clubâ€™ that has started at Westborough High School in Dewsbury.

An extension of the brilliant â€˜Early Kick-Offâ€™ breakfast club project â€“ which Iâ€™ll come onto in a minute â€“ it gives pupils the skills they need to cook for themselves away from the school environment.Â Â

To celebrate the fantastic opening term, we had a surprise for the kids at the cookery club earlier this week â€“ a visit from two of our players! Murray Wallace and Ben Holmes â€“ one of our promising Under-21 players â€“ spent the afternoon cooking alongside the pupils at Westborough. Iâ€™m sure it was a real treat to have the lads there and itâ€™s great that they volunteered their time.Â Â

As I mentioned previously, the EKO breakfast clubs are going from strength to strength, helped in no small part by two superb donations from businesses we work with this week.Â

Direct Voice & Data, a commercial partner of the Club based in Skelmanthorpe, has donated thousands of pounds towards the project â€“ which now runs 16 clubs every day to feed pupils at schools in our region â€“ after its Managing Director Dave Henderson visited Ashbrow School to see it in action.Â Â

As usual, Dave â€“ who Iâ€™d like to congratulate on winning the â€˜Young Business Person of the Yearâ€™ accolade at the 2014 Examiner Business Awards recently â€“ wasnâ€™t alone. As well as our Fundraising Manager Mandy Taylor, Dave was also joined by Joel Lynch, who has volunteered to visit a different breakfast club every week; heâ€™s a great ambassador for the Club.Â Â

The money that Dave and Direct Voice has donated make this project possible and on behalf of the Town Foundation, and personally, I would like to thank them for their support.Â

Support doesnâ€™t always come in the form of money. Another of our partners, Revell Ward, has added something a little different to the breakfast club at Dalton. On top of a very generous donation of money, Â the company has donated a set of â€˜sporksâ€™ to the club to help them serve the hundreds of pupils it now gets at its successful breakfast club every single morning.Â Â

Jennifer Davies, Karen Borowski and Krishna Patel from Revell Ward joined Foundation Trustee Sean Jarvis at Dalton this week to see their sporks being put to good use â€“and from what they told me afterwards, they had a great time!Â

Jennifer told me: â€œThat was brilliant! Canâ€™t get over what bright little sparks the kids are; all of them chirpy and chatty. Â I think the breakfast clubs are not only providing a solid start to the school day, but they must be really good for the childrenâ€™s social skills too! Â It was very enjoyable and rewarding to for all involved.â€Â

Karen added: â€œIt was so much more than eating breakfast; it was fun, friendly and exciting. When the children were asked why they enjoyed attending the breakfast club, the only answer was â€˜foodâ€™. Â Many of the children told me about what they were looking forward to today and the energy was positive and happy.â€Â Again, I would like to thank Revell Ward for its support. Without it, weâ€™d struggle to make the difference we do.Â Â

If reading about the Town Foundationâ€™s work has peaked your interest, find out how you can get involved â€“ please emailÂ mandy.taylor@htafc.com.