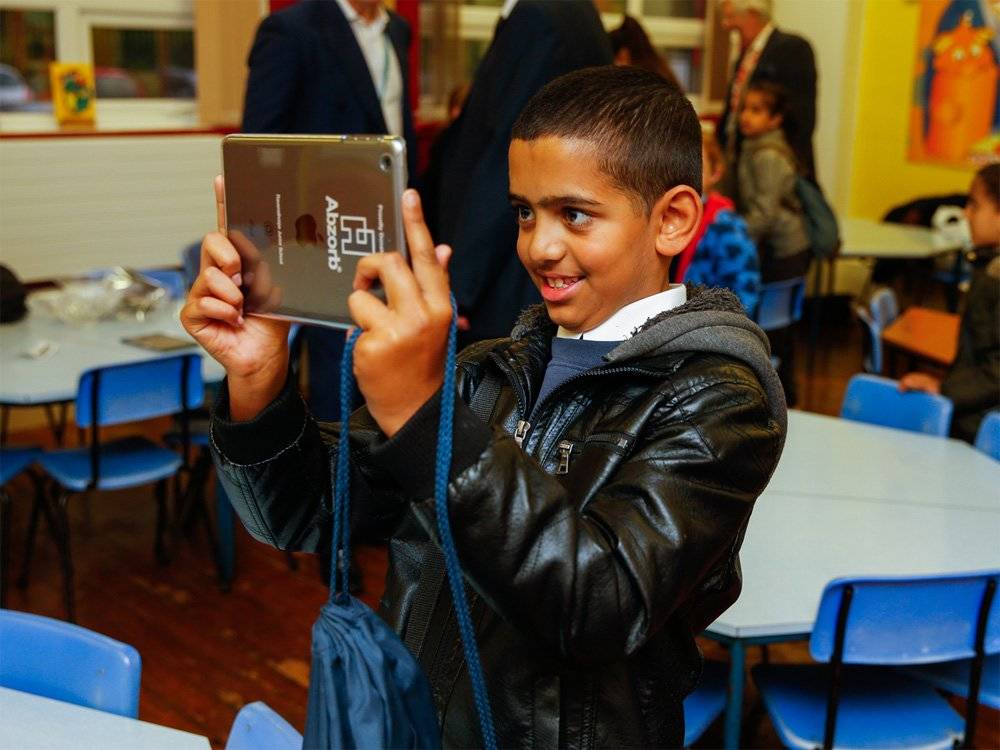 Posted at 15:07h in Trust Fund by townfoundation-admin

Another local school has felt the benefit of a special competition organised by the Town Foundation and charity partner Abzorb.

Based in Brighouse, business connectivity and communication specialist Abzorb is donating iPad Minis to one lucky school each month through a competition in which schools were asked to submit a 100 word article explaining how it would best use an iPad Mini for the benefit of its students.Â Â

The iPad Mini competition was open to all 16 â€˜Early Kick-Offâ€™ breakfast clubs to enter last academic year and, due to the strength of the submissions, Abzorb has decided to give away iPad Minis to six schools over the coming months!Â Â

This monthâ€™s winner is Ravensthorpe CE Junior School, whose submission explained that the iPads would be of great benefit to its many students that did not have access to the internet at their homes.Â

There will be four more winners selected in the upcoming months, all of which will be reported on htafcfoundation.com in due course.Â Â

The first selected winner was Ashbrow, Junior Infant and Nursery School â€“ click HERE to find out why it was selected as a winner.Â

Abzorb has been a long-time supporter of the Town Foundation â€“ pledging a generous Â£6,000 towards the â€˜Early Kick-Offâ€™ breakfast clubs project that has now served almost 200,000 healthy meals at 16 schools since its inception in 2012. Â Â

â€œThe staff at Abzorb shares the charityâ€™s love of our local community and since first getting involved with the Town Foundation, the company has thrown itself into the â€˜Early Kick-Offâ€™ project â€“ becoming weekly helpers at the Dalton School club.Â Â

â€œIts generous donation has already made a major impact on the breakfast club project, but now its new iPad competition has really galvanised the students.Â Â

â€œRavensthorpe was a worthy winner of this monthâ€™s prize. From the schoolâ€™s submission to the competition, it is clear they will make a real difference to the educational lives of the schoolâ€™s students.â€Â Â

â€œWe have been looking forward to delivering the next round of iPad Minis to Ravensthorpe Junior School. Their competition entries all highlighted one common point; that some of the children didnâ€™t have access to the internet at home and having access to the iPad Minis at school will help them with learning, researching subjects and homework. It made it all worthwhile to see the children smile with great anticipation.â€

â€œThe children and staff were very friendly and really appreciated the iPad Minis. In particular, we were impressed by how some of the children embraced technology and quickly took to taking photographs using the iPad Minis.â€Â

The brainchild of Huddersfield Town Chairman Dean Hoyle, the Town Foundation was officially launched in July 2012 after the football club enjoyed huge success in previous initiatives designed to benefit youngsters across the community. Â

Every pound that comes into the Town Foundation is doubled by Foundation Trustee Dean Hoyle and no administration or business costs are taken from the fundraising pot â€“ that cost is instead met by Huddersfield Town. Once money is collected, it is used to fund projects and initiatives that will directly benefit the young people of Huddersfield and the surrounding area, particularly those youngsters who need the support most.