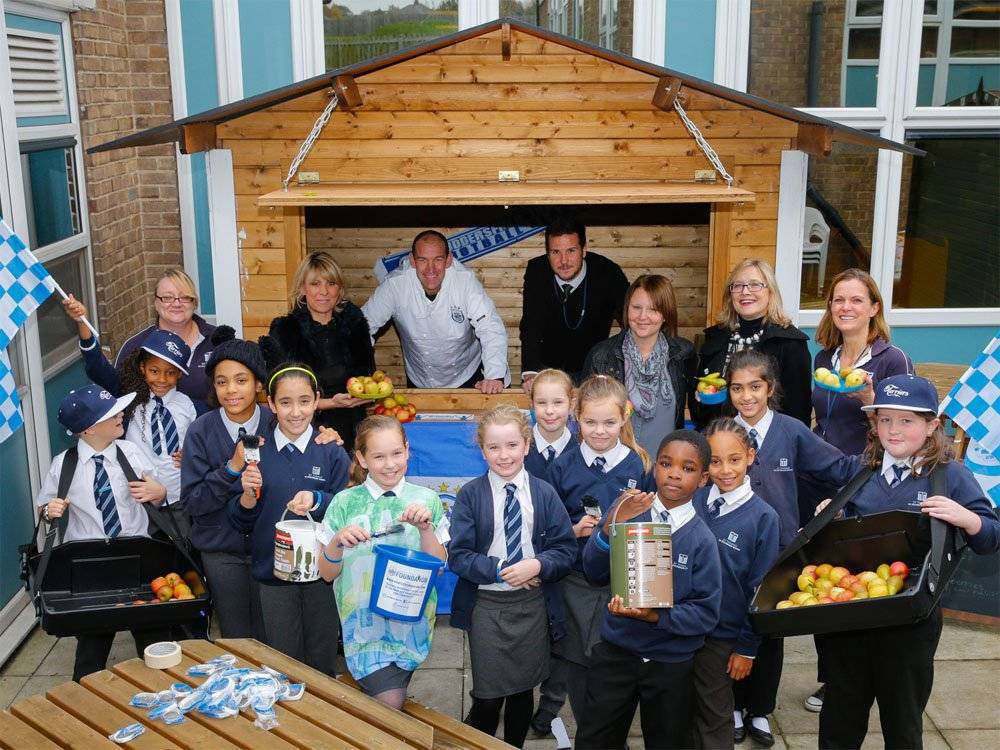 Posted at 15:07h in Trust Fund by townfoundation-admin

Named the â€˜Half-Time Hunger Hutâ€™, the scheme gives pupils aged between seven and 11 the chance to stock up on nutritious fresh fruit and vegetables during their break time.Â

The â€˜Hunger Hutâ€™ was officially opened by Townâ€™s Club Ambassador Andy Booth and Headteacher David Rushby; they are pictured above with pupils from the school, Huddersfield Townâ€™s Rachel Taylor and the Town Foundationâ€™s Trustee Caroline Lee and Corporate Fundraising Officer Mandy Taylor.Â

The Hut, pictured above, has subsequently been painted the famous blue and white colours of Huddersfield Town by club partner PPG Industries. Â Â

Whereas the schoolâ€™s younger pupils benefit from free school meals, the 7-11 year-olds will now benefit from the Hunger Hut â€“ which will plug the gap between breakfast and lunch time.Â Â

â€œIt is brilliant to see the charity supporting a new initiative with an existing school partner of Huddersfield Town.Â Â

â€œWhen we initially met some time ago to discuss our successful â€˜Early Kick-Offâ€™ breakfast club scheme it soon became apparent that the school was already running a well-attended club. However, the passion and pride of the Headteacher, David Rushby, shone through on the day and it was imperative that we explored any other avenues of support that we could offer.â€Â

The Town Foundation, which aims to improve the lives of children and young people in the community, will fund the cost of the fresh fruit and vegetables that the â€˜Half-Time Hunger Hutâ€™ will serve.Â Â