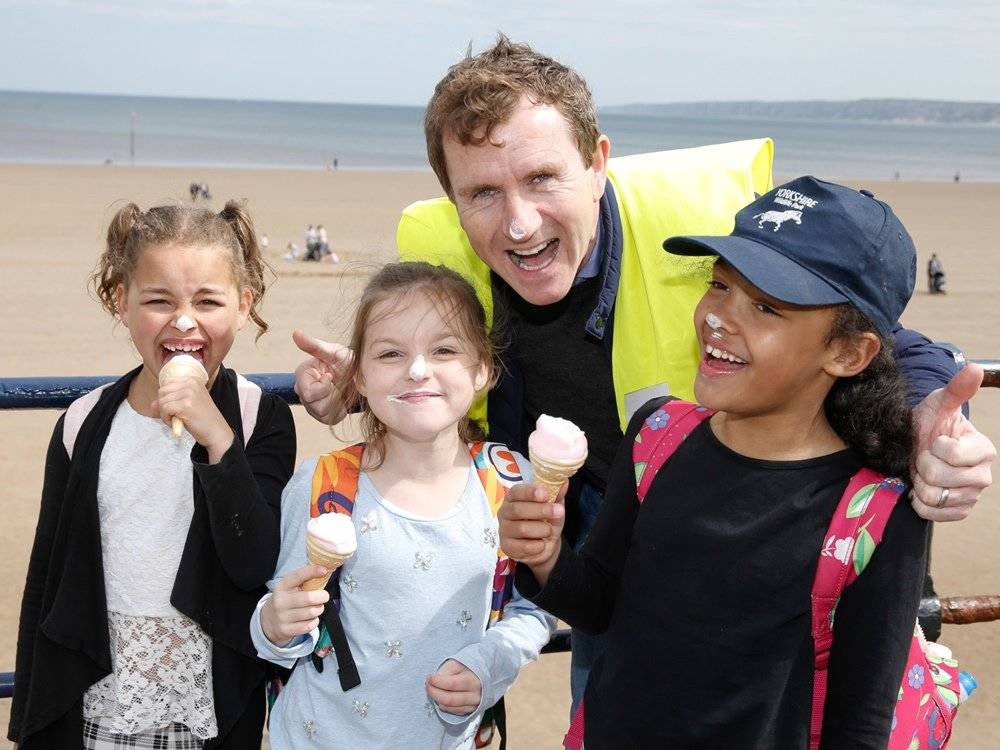 Posted at 13:35h in Trust Fund by townfoundation-admin

The Town Foundation gave 300 local children a day to remember on Thursday with a special trip to the seaside.Â

The children â€“ all from Huddersfield Townâ€™s partner Hillside Primary School â€“ were joined by their teachers, school volunteers and a number of people from the Town Foundation including Town Chairman Dean Hoyle and his wife Janet; trustees Ann Hough and Stuart Bragan and Club Ambassador Andy Booth.Â Â

After leaving on coaches from Huddersfield and making the 70-mile trip to the east coast, the children enjoyed a picnic lunch on the cliff top before making their way to the beach.Â

On the sand, the children enjoyed a traditional Filey favourite â€“ a Punch & Judy show â€“ before enjoying a dance to songs provider by a local childrenâ€™s entertainer.Â Â

The day at the coast was completed with a giant Conga on the beach, followed by a delicious ice cream.Â

Tina Boden, Founder of â€˜The Efficiency Angelâ€™ to name just one of the businesses she represents, was key to the success of the day in Filey and commented:Â

â€œWhen I offered support at the beginning of 2015 to the Town Foundation – a charity whose work I had admired from afar – I was unsure what I would be able to do based on the Yorkshire Coast. When I discovered the plans to take 300 children to Filey, it seemed my local knowledge may be useful.Â

â€œWe wanted the day to be special, but I could have never imagined the impact it would have had on so many people’s lives; children, staff and friends of the Town Foundation alike.Â Â

â€œTo see the children’s faces as they ran in and out of the sea, built sand castles, enjoyed the entertainment and ate ice creams will stay with me for a long, long time but the words of one little girl who turned to me as she stepped on to the beach for the first time will stick with me forever. She said â€œI’ve never been on a beach beforeâ€ – and that is why I love volunteering; to make a positive difference for others’.â€Â

â€œThe look of sheer astonishment on the faces of the children on Thursday is something I will treasure for a lifetime.Â Â

â€œMany of the children had never enjoyed a day on the beach and the sound of laughter, which rippled in the air as they splashed and played, was fantastic.Â Â

â€œThe list of thanks is a very long one, but I would like to acknowledge Julian Hicks and his team from MovieBox Productions, who volunteered their time to join us and help with all those essential duties to ensure that the beach was left spotless and that all the children were happy and safe.Â Â

â€œSpecial thanks must also go to the kind-hearted team from Abzorb, who ensured that the children received a brilliant goody bag containing sunglasses, a water bottle, and sunglasses as a reward for good behaviour.â€Â

This trip was funded by the money raised from the 2014 Three Peaks Challenge, with many of the walkers making the journey to Filey on the day. Click HERE for a review of the challenge!