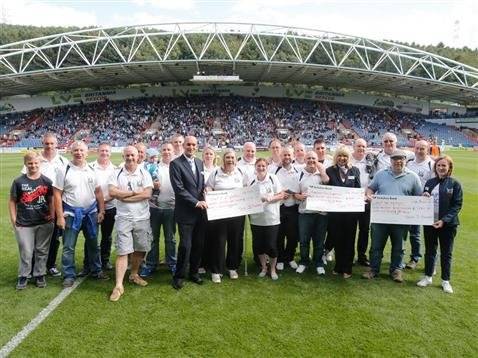 â€˜Team 3 Towersâ€™, which consisted of 22 Huddersfield Town fans, presented a fundraising total of almost Â£30,000 to the â€˜Keep it Upâ€™ campaign, the Town Foundation and Help for Heroes at the recent home game against Blackburn Rovers.Â

Ahead of Townâ€™s Pedal for Pounds 6 bike ride, members of the black, red, pink, bronze and white teams came together to cycle from Paris to Huddersfield before joining the other 270 riders to complete the ride to Blackpool and back on the final day of the 2014/15 season.Â Â

The trip to France has allowed the â€˜Team 3 Towersâ€™ cyclists to visit the graves of a number of Town players who lost their lives in the First World War; Larrett Roebuck, Sidney James, Jack Cameron, Charles Randall and Leigh Roose.Â

Setting off from Parisâ€™ Gare Du Nord Station, the cyclists pedalled from Paris to Sarcelles; through Amiens and Lille and towards Brugge before returning to England, taking in such landmarks as the Arc De Triomphe and the Eiffel Tower on their way.Â

All the above totals including contributions made through Gift Aid.Â

The â€˜Keep It Upâ€™ campaign is a pioneering partnership between Huddersfield Town and the Yorkshire Air Ambulance, which sees 50p from every Â£1 raised go to the football clubâ€™s Academy and the other 50p going to the life-saving charity. Since its inception in 2009, over Â£1 million pounds has been raised.Â

The Town Foundation is the official registered charity of Huddersfield Town, which aims to improve the lives of children and young people in the area. Its pinnacle project is the â€˜Early Kick-Offâ€™ breakfast club initiative, which last season served 130,000 breakfasts across 17 clubs in the region to help local youngsters start their learning day in the right way.Â

â€œIâ€™d like to thank the 22 fans on behalf of the Club for their brilliant effort in raising funds for the â€˜Keep It Upâ€™ campaign and the Town Foundation, as well as Help for Heroes.

â€œThe Team 3 Towers idea was totally supporter-driven and deserves all the magnificent support it received. To raise almost Â£30,000 for the three causes is amazing but well deserved and Iâ€™m proud that they are associated with our Club.â€Â