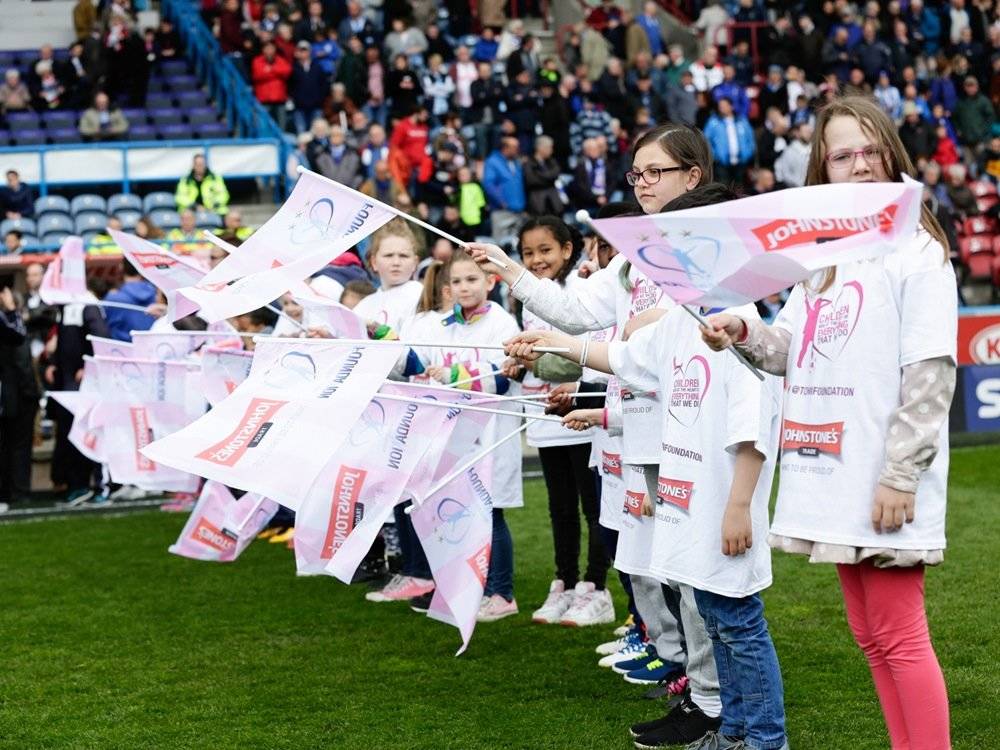 Posted at 14:51h in Trust Fund by townfoundation-admin

The headline was the special one-off magenta and white striped shirt that was worn by David Wagnerâ€™s players in the 1-1 draw against the Blues; an eye-catching strip featuring the names of over 500 supporters and the logo of charity supporter Johnstoneâ€™s Paint by PPG.Â

A limited number of replica pink and white shirts are still available in the Clubâ€™s retail outlets; click HERE to get yours online or visit the Stadium Superstore or Packhorse Centre store during opening hours!Â

Proceeds from the sale of shirts will go to the Town Foundation, which aims to improve the lives of children and young people in the area through innovative projects such as the â€˜Early Kick-Offâ€™ breakfast clubs.Â

Fans also took special selfies in their shirts with Town defender and Ireland U19 international Danny Kane outside the Stadium Superstore from 2.15pm.Â

Elsewhere, Town’s ‘Give Us An H’ match day programme was priced at Â£2.50 this weekend, with the extra 50p going straight to the Town Foundation.Â

Many of the ‘Early Kick-Off’ breakfast club children were involved on the day too, with 80 taking part in a pre-match lap of honour and others joining the Guard of Honour as the teams entered the field.

Town Chairman and Foundation Trustee Dean Hoyle got involved too, accepting a cheque for Â£2,000 from the FAâ€™s Community Shield fund on behalf of the charity before winning a special penalty shoot-out against Birmingham Cityâ€™s honorary Vice President Michael Wiseman!Â

â€œAs ever, the annual Town Foundation game is very important in raising funds for – and the profile of â€“ the Clubâ€™s dedicated childrenâ€™s charity.Â Â

â€œThe special pink and white shirt that the players sported has been very well received by everyone and it was fantastic to see so many Town fans wearing it in the stands at the weekend.Â Â

â€œMost of all, it was very rewarding to see the smiles on the childrenâ€™s faces for being part of the afternoon. That is why the charity exists; to make a difference in their lives. Experiences like being involved in a Huddersfield Town match day do exactly that!Â

â€œOn behalf of the charity, Iâ€™d like to thank everyone who was involved in making this day possible; not least our friends at Johnstoneâ€™s Paint by PPG for their terrific support.â€