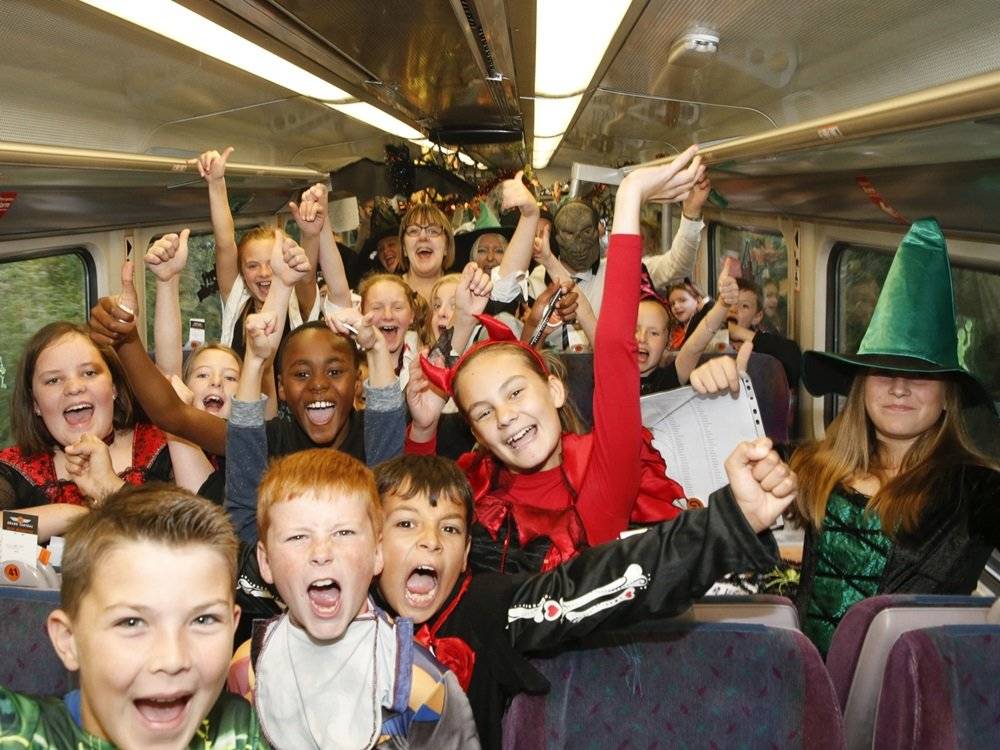 Posted at 11:31h in Trust Fund by townfoundation-admin

The children were taken on a free train ride from Brighouse to Doncaster return on Thursday 13 October after a carriage was donated by Club Partner, Grand Central.

The youngsters, who all came in costumes and fancy dress, started their day being taken to the train station from school by Stotts Coaches who kindly offered to provide the transportation free of charge.

While the children were being brought to the station the Huddersfield Town Foundation team, led by Fundraising Manager Julie Sheffield, were furiously decorating the train to give it a Halloween theme and to help open the childrenâ€™s imaginations during the exciting, spooky journey.

Throughout the train ride Author and Patron to the charity, Helena Pielichaty got the children involved in both reading and writing activities, bringing the Halloween themed train to life!

The children were given a creative writing pack and were encouraged to put their own spin on a story read by Helena, who also gave out free signed copies of her books at the end of the journey.

A number of prizes were also given out, to students who came up with the best names, those who had the best story and for the ones that had the best costumes.

Midway through the journey a surprise guest entered the train.

Jane Cox, who plays Lisa Dingle in ITV soap Emmerdale, found out about the event and came to surprise the children, all adding to the experience.

The actress signed autographs for the children and told members of the Foundation she would love to get involved with more of their work!

As well as creative activities the school pupils also sang when they arrived at Doncaster train station before the return leg of their trip.

â€œI would like to thank Grand Central and Stotts coaches for providing us with free transport, as without them it wouldnâ€™t have been possible to put this event on for the school children.

â€œThe youngsters thoroughly enjoyed the day and the Halloween themed train really got their creativity flowing.

â€œHaving Helena (Pielichaty) on board was excellent, she really knows how to engage with the children and bring the best out of them.

â€œIt was a complete surprise when Jane Cox came onto our carriage and we could tell that some of the children were really excited to see her.

â€œThe feedback we got from Jane, the pupils and everyone else involved was fantastic and we are looking at putting a similar event on in the future.â€