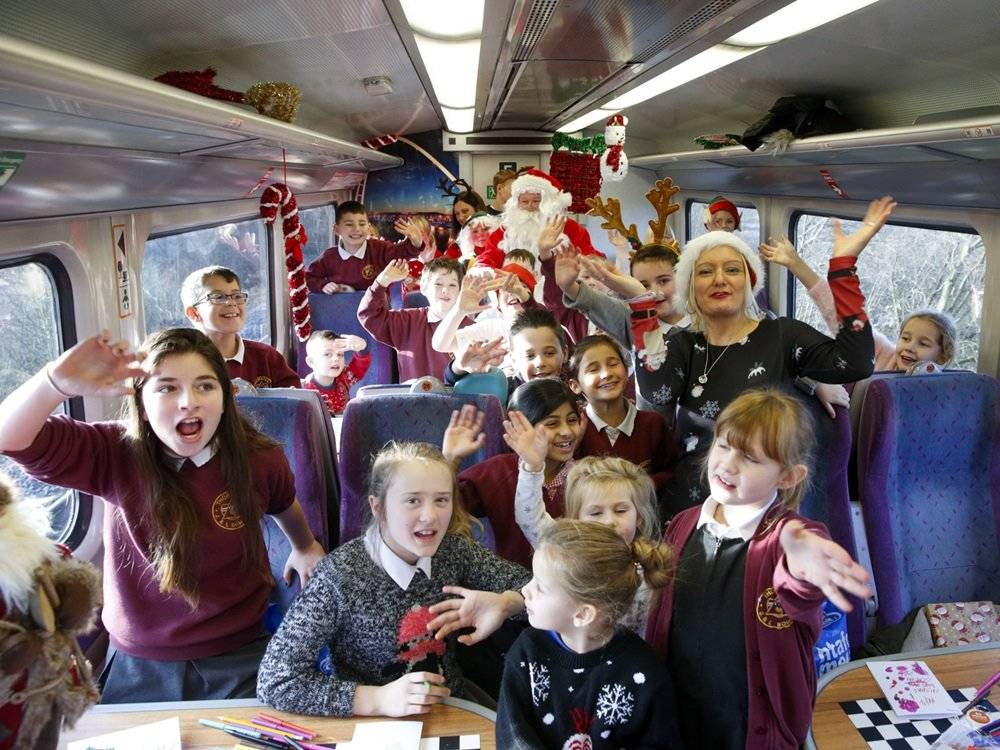 Posted at 11:13h in Trust Fund by townfoundation-admin

Huddersfield Town Foundation has taken children from Thornhill Junior and Infant School on an educational Christmas train to get their creativity flowing ahead of the festive period.

The children, who were aged between four and 11, came to school showing off their best and brightest Christmas jumpers before being taken on a coach, kindly provided free of charge by Stotts Coaches, to the train station.

Whilst the children were being brought to the station members of the Huddersfield Town Foundation team, led by Fundraising Manager Julie Sheffield and Trustee Janet Hoyle, showed off their creative spirits, furiously decorating the

carriage to give it a festive feel and help get the children in the mood for Christmas.

The youngsters boarded the train at Brighouse and were taken on a free return train ride to Doncaster on Wednesday 14 December after a carriage was donated by Club Partner, Grand Central.

Throughout the ride upcoming artists and Greenhead College students Grace Karczewska and Joe Whiteley were on board helping the different children with designing and drawing their Christmas cards.

Children were provided with a variety of different coloured pens and pencils to create their Christmas cards and produced an array of exciting designs ranging from Christmas Trees to Snowmen.Â

Prizes were given out to Children in each age groups for the most colourful and best designed Christmas cards.

Midway through the journey the youngsters were surprised when Santa Claus joined them on the train.Â

He came round giving each child early individual Christmas presents. One girl was overwhelmed when Santa boarded the train and handed Santa a gift she had specially wrapped for him.

Upon arrival at Doncaster train station the children were encouraged to sing Christmas carols to the public before they returned to Brighouse.

â€œFirstly, I would like to thank both Grand Central and Stotts Coaches for again providing us with the free transport, by doing this they once again made the event possible and even more enjoyable for the school children.

â€œThe Children were smiling throughout the day and the Christmas themed train really put them in a festive mood.

â€œGrace and Joe really got their creativity flowing and we ended up with some really nice Christmas cards, which Iâ€™m sure their parents will love!

â€œThe Christmas train worked really well and it was great to see the excitement on the childrenâ€™s faces when Santa walked through the carriage.

â€œThe feedback we received from the children, the school and everyone involved was superb and I would love to do more events like these in the future.

â€œIt was fabulous to see the children turn up in their Christmas jumpers and get into a festive mood straight away.

â€œThis kind of event is exactly what the Town Foundation is about; helping younger people learn and develop with fun, exciting activities.

â€œAll the children enjoyed the day and it was a great trip for me to be a part of!â€