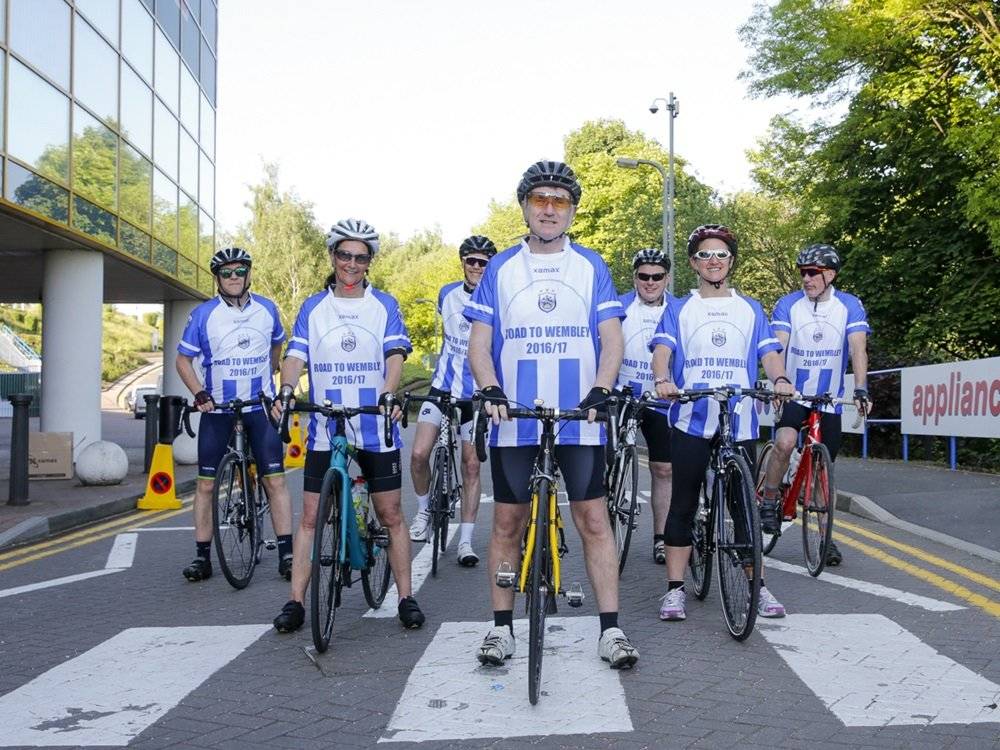 26 May The Road To Wembley Bike Ride Has Begun

Posted at 11:13h in Trust Fund by townfoundation-admin

The ‘Road to Wembley’ has begun as Huddersfield Town Chairman Dean Hoyle, alongside his wife Janet, set off from the John Smith’s Stadium this morning on a 200-mile journey to Wembley Stadium.

The two and a half days of cycling to the national stadium will help a myriad of people from different backgrounds and areas of Huddersfield have a day to remember by attending the Club’s Sky Bet Championship Play-Off Final at Wembley on Monday 29 May 2017.

So far, the ‘Road to Wembley’ bike ride has raised over £5,500 and you can sponsor Dean & Janet by clicking here on their JustGiving page!

Similarly to the Town’s last Play-Off Final at Wembley in 2012, the seven cyclists – donning the ‘Road to Wembley’ jerseys – will cycle to the capital to raise funds under the Town Foundation banner.

Any money raised through sponsorship will be used to give an estimated 200 Huddersfield locals from a myriad of different backgrounds a day to remember, paying for tickets and travel to Wembley for the Play-Off Final.

“Football is quite unique in its ability to bring people of different backgrounds together and the Play-Off Final gives Huddersfield Town a huge opportunity to make an impact on this front.

“I’ve been really inspired by the work that has been carried out in our area by the ‘More In Common’ charity, setup in honour of Jo Cox. As Jo now famously said, “we have more in common than that which divides us.” I completely agree and think that, by raising money, we can take around 200 Huddersfield people from all different backgrounds to the game together as one for a day to remember.

“Nobody should be marginalized or disadvantaged on the basis of their identity. That is not what Huddersfield Town is about and I want to illustrate that on the greatest stage of all, Wembley. I hope the community gets behind this idea and helps to create something special.”

If you want to donate to the ride, please click HERE to access the ride’s JustGiving page.