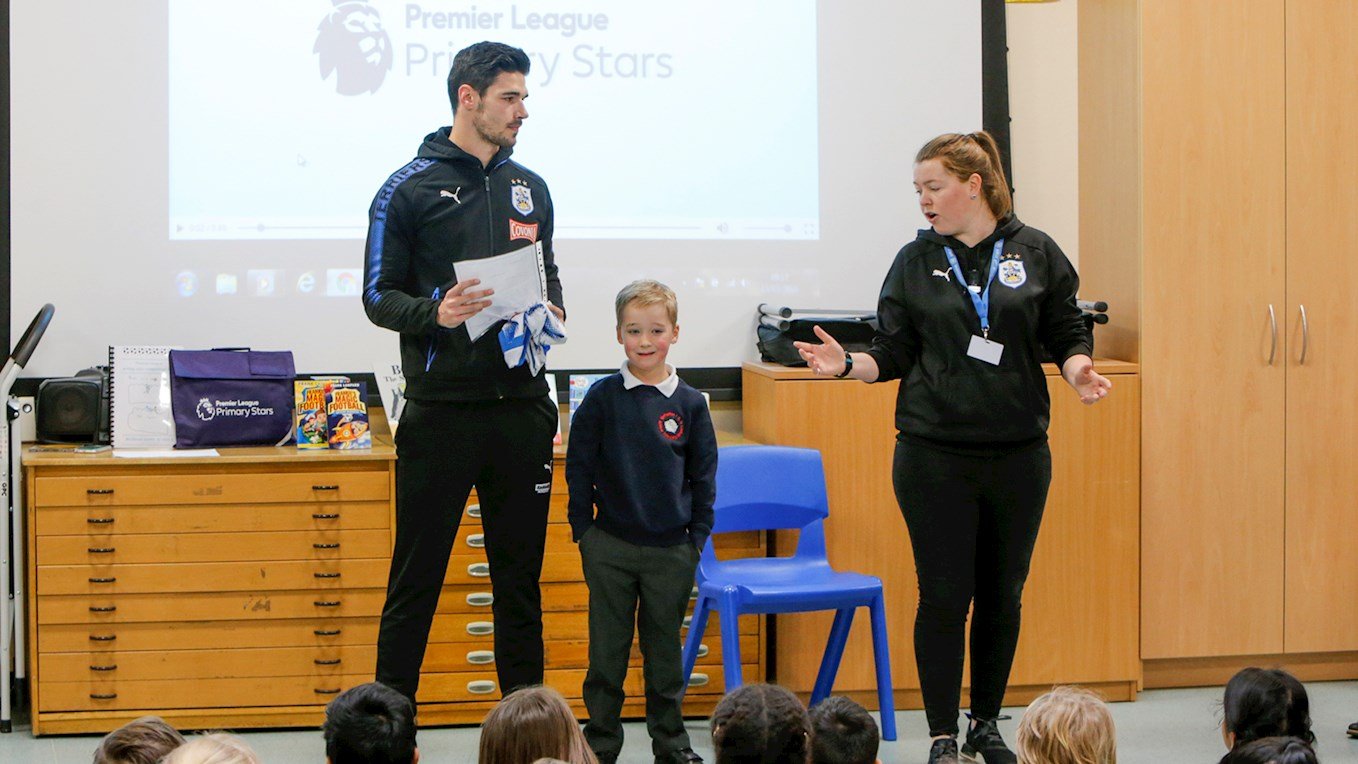 Posted at 10:55h in Foundation News by townfoundation-admin

The Premier League Writing Stars poetry competition returns for its second year to inspire children aged between five and eleven to get creative and pen their own poem on the theme of diversity.

Christopher Schindler presented one of the Yorkshire regional winners in last yearâ€™s competition, William Quinn from Netherton Junior School, for his winning poem entitled â€˜Football Madâ€™ around the key theme of â€˜Resilienceâ€™.

The campaign, which is open to all primary schools in England and Wales, is supported by stars from the worlds of football, entertainment and literature. Last yearâ€™s inaugural Writing Stars competition encouraged more than 25,000 primary school pupils to write a poem.Â

Entries will be considered against a range of criteria including creativity, tone and originality. The winning poems will be published in a limited-edition book. Other prizes include author-led writing workshops and Premier League trophy school visits, as well as winning poems being read aloud by some of the competition judges. The first 1,000 primary schools to enter will receive a poetry book bag containing 12 different titles.

Premier League Executive Chairman, Richard Scudamore, said: â€œWe were thrilled by the response to the inaugural Premier League Writing Stars poetry competition. To receive more than 25,000 poems written by primary school children from across England and Wales was extraordinary. We hope that with the excellent judging panel we have this year, more children will be encouraged and inspired to write creatively.Â

â€œThis yearâ€™s theme, diversity, is hugely important to us as an organisation and to all our clubs. The Premier League has players and fans from all over the world and the competition is open to everyone, everywhere. We hope that comes through in the poems written for this yearâ€™s Premier League Writing Stars and look forward to reading the entries.â€

Former Premier League footballer and BT Sport presenter, Rio Ferdinand, said: â€œDiversity is a really important topic for young people to explore and write about, so Iâ€™m very excited to be a part of this yearâ€™s Premier League Writing Stars judging panel.Â

â€œAs a former Premier League footballer, Iâ€™ve shared a dressing room and a pitch with people from different countries, cultures and backgrounds. Football has an amazing ability to unite us, as players, as fans and as people. As a parent with an interest in poetry, I think Writing Stars can inspire children to openly discuss and celebrate their differences and similarities both at home and in the classroom.â€Â
Singer and songwriter, Olly Murs, said: â€œI love writing songs, so I hope that Premier League Writing Stars will encourage children across England and Wales to get writing. I am a massive football fan, so this poetry competition brings together two of my biggest passions and I canâ€™t wait to read the poems. Good luck!â€

Overall winners and 9 regional winners will be selected from across both Key Stages 1 (ages five to seven) and Key Stage 2 (ages seven to 11). In Wales, two winners will be chosen from each Key Stage â€“ an English language and a Welsh language winner – with support from Casia Wiliam, current Bardd Plant Cymru (Welsh-language Childrenâ€™s Poet Laureate). Poems can be entered in all forms, including lyrics or a rap, and teachers and parents can register or nominate their childâ€™s school to take part at PLPrimaryStars.com.

Waterstones Childrenâ€™s Laureate, Lauren Child, said: â€œPoetry gives children a creative way to express themselves and have the freedom to talk about personal and moving subjects in an unrestricted way. I am already looking forward to reading what this yearâ€™s young poets write.â€

Poet Joseph Coelho said: â€œPoetry provides a fantastic way for children to explore all manner of themes in interesting and imaginative ways. Diversity is a hugely important topic for everyone to explore and one that children in particular are able to delve into with joy and creativity. Last yearâ€™s Writing Stars Competition led to a surge of fantastic entries and I look forward to reading the amazing entries we are sure to get this year. I wish all the young poets out there the best of luck and lots of writing smiles.â€

The Writing Stars competition is supported by the National Literacy Trust and is part of the Premier League Primary Stars education programme, which engages more than 16,000 primary schools in England and Wales.Â

National Literacy Trust Director, Jonathan Douglas, added: â€œPoetry has the power to unlock childrenâ€™s imaginations, unleash their aspirations and help them flourish at school. It also enables children to express themselves in a multitude of ways, from raps and lyrics to free verse and traditional poems. Combining football and poetry is a wonderful way to explore the theme of diversity and to think about, embrace and celebrate our differences. I canâ€™t wait to read the childrenâ€™s poems. Good luck to all those taking part.â€

All poems are submitted via schools either online or by post. Teachers have until Friday 21 December to submit their pupilsâ€™ work. Winners will be announced in March 2019.Â

The Foundation will also have a prize for their own local winner and submissions should be emailed to adam.davies@htafcfoundation.com when submitting entries to the Premier League.