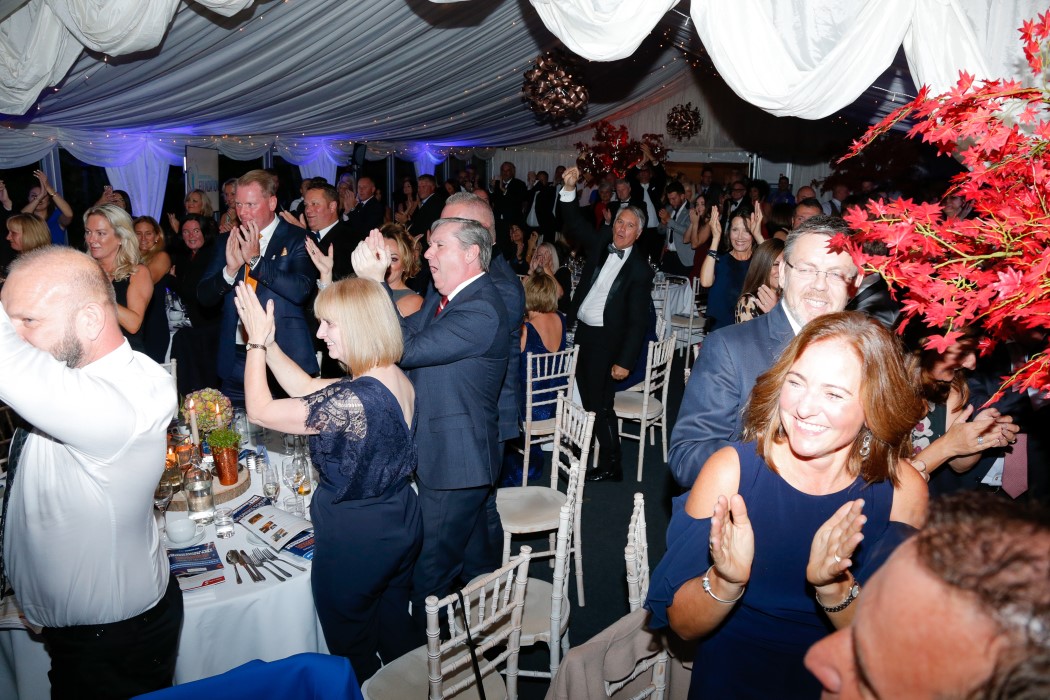 The event which took place at The Woodman Inn, Thunderbridge, entertained over 120 guests in the spectacular marquee and raised an incredible amount of money that with benefit the Town Foundation and the â€˜Early Kick-Offâ€™ Breakfast Clubs.

Throughout the evening, guests raised Â£60,000 that will make a massive difference to people in the community.

Special guest, Colin Quaner, Huddersfield Town First Team forward, turned up to surprise and meet and greet attendees of the Foundation Ball. Guests were handed a glass of fizz on arrival before posing in front of the flower wall in the private drinksâ€™ reception.

Guests were encouraged to try the one-of-a-kind â€˜Foundation Gin Fizzâ€™ which The Woodman Inn had specially created for the event and donated all proceeds from the cocktail to the HTF.

Attendees were invited to take their seats in the marquee with a call-to-dinner at 7.30pm, with each individual guest receiving a Foundation Ball Brochure and a special thank you card which had been personally made from some of the children who benefit from the Foundationâ€™s work in our community.

Marsden Junior School opened the evening with a selection of their Premier League Primary Stars Big Chant songs. After their performance the children introduce the compere for the evening, Kate Hardcastle MBE.

Kate has added her unique brand ofÂ knowledgeableÂ commentary to hundreds of interviews & documentaries for BBC, ITV, Channel 4, Channel 5, Sky News and Radio channels BBC 2, BBC 4, BBC 5 Live and commercial stations. Kate was honoured with an MBE in the Queenâ€™s Birthday Honours 2018 and was the recipient of the Prime Ministers Point of Light Award.

Huddersfield-born Kate opened the evening by honouring Huddersfield and spoke of the pleasure in being asked to be a part of the fabulous event. Kate thanked everyone for attending and supporting the event before giving a special thanks to the Ballâ€™s supporters, Pure Business Group, Magic Rock Brewing, See It Now Sports, Banana Kick and Swooshed Event Production.

Siobhan Atkinson, Foundation Chief Executive, took to the stage to enlighten attendees on some of the incredible work the Foundation is currently undertaking and issues they are tackling in our local community.

The fun-filled evening began with a game of heads and tails with the winner receiving a magnum of prosecco!

An exclusive reveal of the HTF new campaign â€˜Terrier in Meâ€™ was uncovered with the first-viewing of the heart-wrenching promotional video of the HTF. The film was incredibly received by the attendees with an outstanding applauds to the Foundationâ€™s work afterwards.

Kate invited the three participants of the film on-stage to join her â€“ Holly Marie-Ann Owen, Tom Oâ€™Neill and Cryus Rowe. Each participant gave a short speech on the help they have received from the HTF before giving important reasons as to why we need people to donate to this fantastic charity to continue the community work.

Phil Hodgkinson, Huddersfield Town Chairman, then joined Kate on stage to speak exclusively to the Foundation Ball attendees about the charity and his commitment to continue working and supporting the HTF.

Huddersfield Town Commercial Director and HTF trustee, Sean Jarvis, was invited on stage to host the Ballâ€™s live auction. The HTF had a variety of one-of-a-kind auction prizes which has been donated to the charity including:

The auction received an incredible response from attendees with The Woodman, Patrick Stewart, Richard Gower and Scott Hufton generously donating two of their auction prizes to ensure no one left disappointed and further funds were raised for the HTF.

A silent auction facilitated by See It Now Sports was also present at the Ball with lots of sports memorabilia and experiences available.

The event concluded with a DJ and disco with the entertainment sponsor, Magic Rock Brewing, selecting the first 10 songs which included the Huddersfield Town fan-favourite â€˜Micheal Hefeleâ€™ song!

â€œI am overwhelmed with the generosity of supporters to raise such a significant amount to help our local community at this event.

â€œI am thrilled with the success of the first-ever Huddersfield Town Foundation Ball and the positive response received from all attendees.

â€œIt truly was a fantastic night!â€