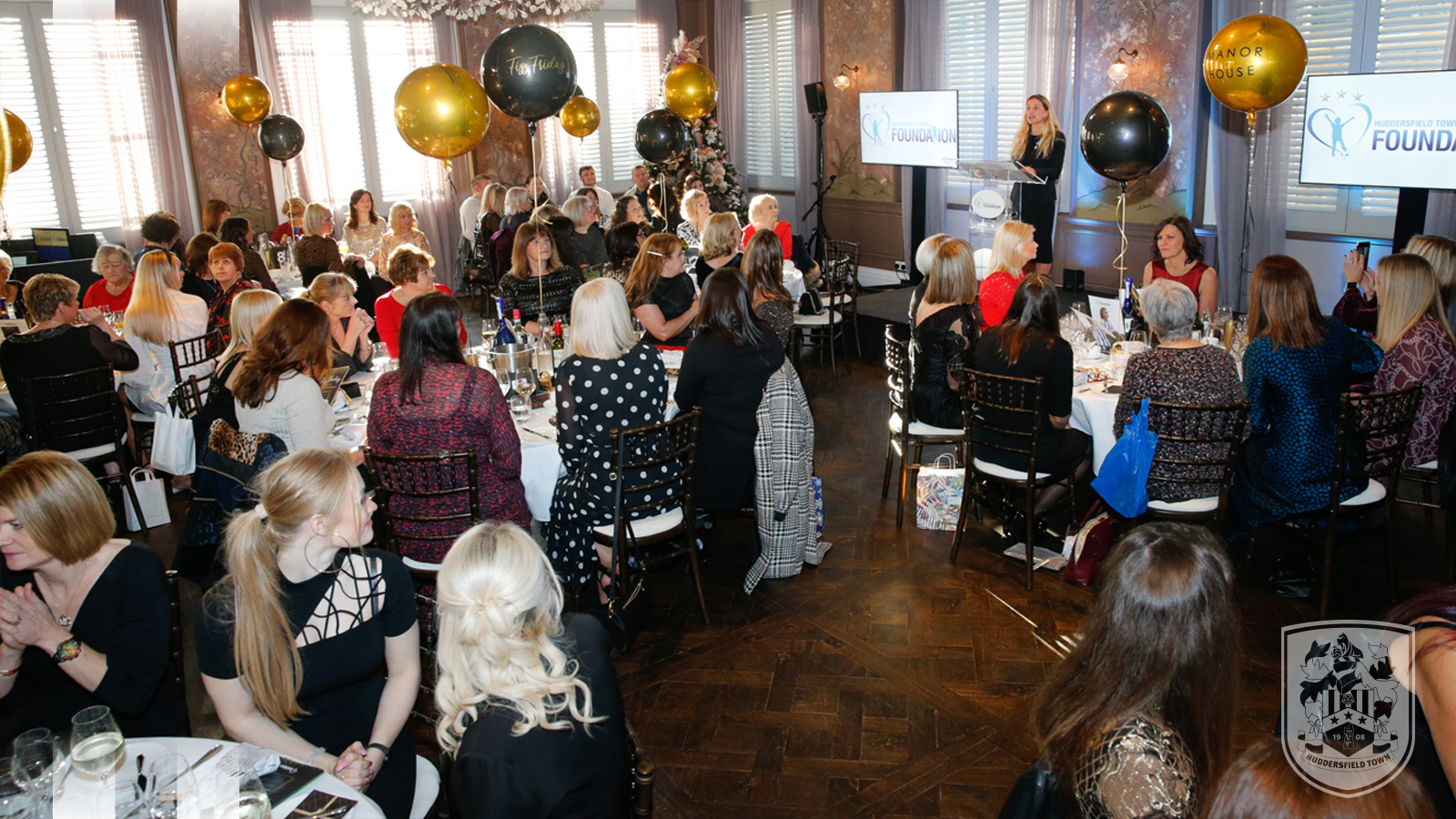 The Huddersfield Town Foundation hosted their annual ladiesâ€™ lunch on Friday 29 November, now known as â€˜Fizz Fridayâ€™. The event took place in the beautiful Coach House of The Manor House, Lindley with the venue acting as the eventâ€™s headline supporter.

Over 130 guests were in attendance at the event, hosted by the Jo Cox Foundationâ€™s Ambassador Kim Leadbeater, to learn more about the work of the Huddersfield Town Foundation and be entertained with an afternoon of games, music and more.

The event raised a whopping Â£7,713, which is a Town Foundation record and testament to the strong support of the community.

On arrival, guests were handed a glass of fizz before having chance to partake in some retail therapy, with local exhibitors such as Hollybank School; Divine Gin; Jan Swallow Crafts; Almond Clothing; Tropic Skincare all selling their crafts, just in time for Christmas.

Guests were called to lunch at noon and Kim Leadbeater opened proceedings, with a few words of welcome from the Foundationâ€™s CEO, Siobhan Atkinson. Guests were then invited to take part in the first game of the day: a â€˜heads and tailsâ€™ game, where they were asked to answer true or false facts all surrounding the theme of breakfast. This was led by Jeannette Cartwright of Kirklees Catering Services, who also donated a bottle of pink Moet for the winning prize.

Sporting Memories participant, Richard told guests how, as a youngster, he used to catch the bus from Heckmondwike to Huddersfield to watch HTAFC and, even though he now considers himself a Liverpool fan, he enjoys attending the Foundationâ€™s Sporting Memories sessions at the Brian Jackson House, where he can talk with friends about his local club.

EmployAbility participant, Ivan explained that the Foundation has had a transformative impact on his social life and his confidence levels and that he now enjoys helping out as a match day volunteer with the Foundationâ€™s â€˜Fans for Foodbanksâ€™ initiative. Most recently, Ivan took part in the NCS programme, where he was exposed to a range of new activities such as the â€˜social action challengeâ€™.

Both participants were presented with a HTAFC football signed by the First Team as thanks for sharing their stories with the room.

Once desserts were underway, Kim Leadbeater opened the live auction, which included a variety of â€˜money canâ€™t buyâ€™ prizes such as:

– A â€˜Come Dine With Meâ€™ dinner party, cooked by the HTAFC first teamâ€™s own chef;
– A family photography session, donated by Club photographer, John Early;
– An 18 CRT diamond necklace, donated by JPB Jewellery;
– A signed and match-worn Christopher Schindler shirt;
– X2 tickets for the Boardroom on match day, including a three course meal and Directorâ€™s Box seats;
– Bespoke tailored shirt and tie, donated by Owen Scott; and
– The chance for x2 to play FIFA against First Team players at PPG Canalside.

â€œThis was my first experience of the Ladiesâ€™ Lunch since joining the Foundation and it didnâ€™t disappoint. The team have done a fantastic job in organising and The Manor House was the perfect setting.

â€œI would like to thank each and every one of our guests for their contribution today, whether it be local businesses buying a table or individuals adding to a gift aid packet. The funds will be used to sustain our invaluable work across the Kirklees community.

â€œWe hope everyone had a brilliant day and will consider joining us again in 2020.â€