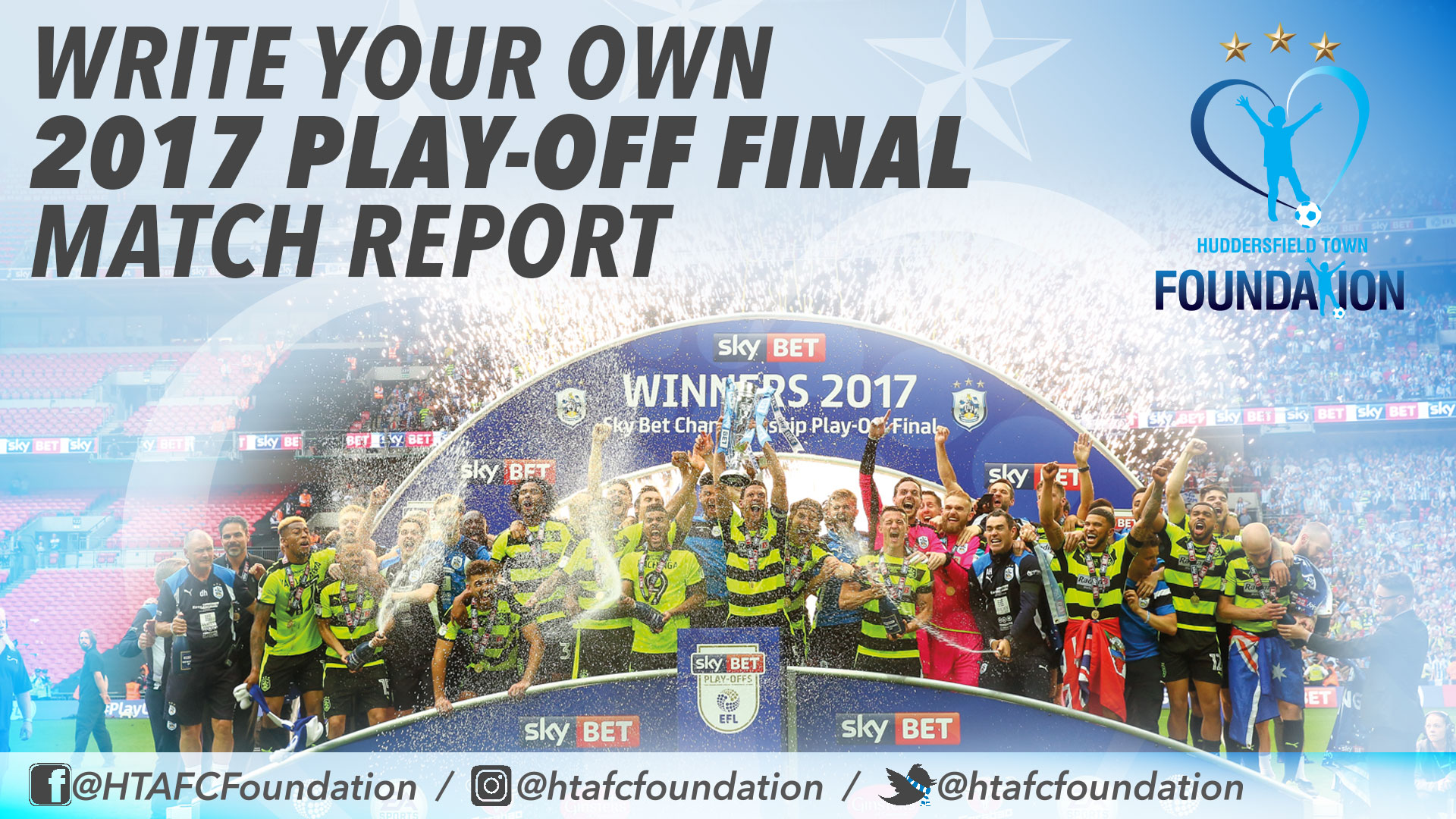 Posted at 14:27h in Foundation News by Adam Tomlinson

On the three-year anniversary of Huddersfield Town’s Sky Bet Championship Play-Off final victory over Reading, Town fan Georgia Cook, 16, reflects on the events of 29 May 2017 at Wembley Stadium.

At the start of the week, the Huddersfield Town Foundation launched a competition encouraging youngsters to transcribe their reflections on the big day as a way of improving their Literacy skills.

Georgia, who is from Mirfield and has a passion for Journalism, did just that. Without further ado, here is her report on the match that secured Huddersfield Town’s place in the Premier League for the first time.

Monday 29th May 2017, the Terriers travelled to biggest stage of them all Wembley Stadium to play the Royals for the Championship Play-Off Final.

Winning this earnt a place in the Premier League – a childhood dream for every footballer along with the victorious club becoming a reported £200 million pounds richer. This game between Huddersfield Town and Reading was huge.

39,000 Huddersfield Town fans lifted the black and yellow card in the air and showed their support to the warriors on the battlefield. With thousands watching around the world, the time had arrived.

With Tommy Smith starting as captain, club captain Mark Hudson was left on the bench. Using the 4-2-3-1 formation, David Wagner made one change to the selected 18 who conquered The Owls at Hillsborough in the semi-final bringing Kasey Palmer to the bench.

Reading made one switch with Jordan Obita on the bench and Dutch born Danzell Gravenberch starting. Reading’s skipper Paul McShane was suspended after being shown the red card in the first leg of their semi-final victory over Fulham. So, it was Welsh international Chris Gunter who led the blue and white Royals out of the tunnel.

Due to an incredibly tense opening, within five minutes a foul on Town’s Rajiv van La Parra allowed Aussie international Aaron Mooy to take a free kick on the left. This led to the first chance of the game when German centre-back Michael Hefele forced a downwards header wide – a huge chance to take the lead.

Town edged closer to taking the lead in just the tenth minute after an attack down the right side by Smith. German winger Elias Kachunga swept the ball across the box and Izzy Brown put his shot wide from two yards out.

Reading were quick to respond as a curled shot from Lewis Grabban went wide, making as much use of the space as possible. With both teams taking a cool, calm and collected approach to the game, it was a slow burner. Town kept pressing and this was shown when Reading centre-back Joey van der Berg was booked after dragging Kachunga down.

Jonathan Hogg was booked soon after in the 28th minute after a late lunge on Danny Williams. David Wagner and Jaap Stam were cooking up a spice in midfield. However, Huddersfield Town continued to look slick until the half time whistle blew.

Returning to the pitch were two fierce sides, hungry for more. The second half opened with pace from both sides and Liverpool loanee Danny Ward making a clever save to deny Swift of having the opportunity to take the lead.

The Royals had their best spell yet when Lewis Grabban had a chance to add a goal into the play off final after getting on the wrong side of Hefele, but once again putting his shot wide. Another chance to take the lead not executed to its potential.

On the hour mark it looked to be Reading starting to dominate the game with an average of 62% possession. With Kachunga being booked for dissent at the same time. After being booked, David Wagner took on his managerial role and reminded Kachunga to calm down and think. Town started to get back into it as they weren’t going down without a fight.

Feeling slightly threatened, Stam sent on Jordan Obita and switched to a flat back four whilst Wagner brought on Collin Quaner for Kachunga. A move that was crucial in the semi-final against Sheffield Wednesday.

Suddenly it switched and it was Town who had to defend, in which Hefele made an outstanding block on Grabban to prevent a shot into the box in the 71st minute which could have been fatal and a game changer.

Williams was targeted once again but this time it was Captain Tommy Smith who went into the book but just 15 minutes before, Town went close when Mooy drilled a ball into Quaner who didn’t know much about it and another chance was put wide.

German hero Hefele once again intervened flawlessly to stop Yann Kermorgant as Reading piled on the pressure in the last 10 minutes of the game. With Tommy Smith being forced off the pitch after sustaining an injury, Martin Cranie replaced the Captain at right back in the 88th minute.

With seven minutes being added to the inseparable war, it was Gunter who headed it just over the bar while Huddersfield protested for a foul on van La Parra with the referee continuing play. Nothing could separate these teams; the tension was unbearable with it still being 0-0.

Just eight minutes into extra time Wagner felt the need to freshen up the midfield by bringing on Chelsea loanee Kasey Palmer for fellow blues loanee Izzy Brown. This was because the action had slowed down and the spirits of the team needed to be lifted in order to not give the game away.

Jaap Stam was quick to acknowledge this and sent on Liam Kelly replacing John Swift who had been a constant threat throughout the game. Just before half time in extra time the Terriers’ fans hearts skipped a beat as Reading came incredibly close to scoring as McCleary hit an 18 yard low thunderbolt. This went inches wide of Ward’s left-hand post. Jonathan Hogg was reminded to calm down after catching Chris Gunter with a mistimed challenge in the 10th minute of second half extra time.

Wells had the chance to be the Play off final hero when Palmer’s right wing cross was put wide by the Bermudian striker. In the last few seconds German left back Chris Lowe slightly over-hit a free kick for Cranie at the back post. We all knew what this meant, the faces of the fans spoke for itself… penalties.

With the penalties to be taken at the Huddersfield end and Danny Ward to face the first kick, this was now or never for both teams. The most heart-breaking way to separate two evenly matched teams. The atmosphere in the stadium was electric, neither chairman could bear to watch.

Chris Gunter was the first of five to take a penalty for the royals placing it in the bottom left scoring first for Reading.

It was then Chris Lowe who was first up against Ali-Al Habsi at the Town end, placing the ball to the goalkeepers right. Making it 1-1.

Up next stepped midfielder Danny Williams for Reading, who took a cool, calm and collected approach and put the ball down the middle after waiting for Ward to commit himself.

After scoring in the semi-final against Sheffield Wednesday Michael Hefele was up next but this time after telegraphing where he was going to put it Al-Habsi was able to get down on his right and make the save. Devastating for Huddersfield.

Substitute Liam Kelly was up next for Reading who was able to score a perfect penalty hitting with venom into the roof of the net. No goalkeeper would have stopped that one.

Striker Nakhi Wells was up next for Town curling it to the right with Al Habsi stuck on his line stranded to the spot.

It was Liam Moore to take the fourth kick for the Royals, with Town fans elated with joy as the ball went over the bar. This was a lifeline for Town.

Manchester City loanee Aaron Mooy was up for the next one. Chairman Dean Hoyle could not watch but Mooy comforted him by sending home a well struck penalty in the bottom left.

Jordan Obita was Reading’s fifth penalty taker and with all the trust in him, it was Huddersfield’s Danny Ward who was able to produce the save on his left.

The most expensive signing for Huddersfield was up to take the decisive penalty that would either send Huddersfield to the Premier League or continue the shootout that became unbearable for all.

With Christopher Schindler placing it in the bottom left, Huddersfield had returned to the top tier of English football.

While the bodies of the Royals fell in despair to the ground, Huddersfield could not believe it and celebrated with each other and the fans who had supported them throughout it all. This could not happen. Little Huddersfield Town had made it to the Premier League. This was extraordinary. This was magnificent.

The Wagner revolution was going to play some of the biggest names in football.

Oh, what a night!