The Huddersfield Examiner Community Awards celebrated the work of local people and organisations by means of a virtual ceremony last week.

Despite the Huddersfield Town Foundationâ€™s Little Big Sleep Out (LBSO) missing out on Community Project of the Year, the evening was a fantastic opportunity to recognise achievements over the last 12 months.

Usually the event would take place at the John Smithâ€™s Stadium, but the impact of COVID-19 meant this yearâ€™s edition was streamed live on YouTube.

Hosted by ITV News Presenter Nina Hossain and PR professional Andy Hirst, the evening started with introductions before moving on to the first of the13 awards presented.

Each category had three nominees which were described in further detail by the hosts, before representatives were linked in via Zoom and the winner was announced.

The Town Foundationâ€™s Little Big Sleep Out held in October 2019 was nominated alongside the Paddock Community Trust and the Christmas Dinner, Huddersfield. 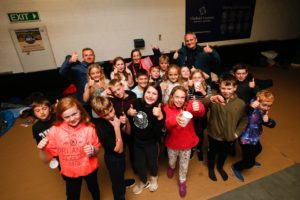 Modelled on the Big Sleep Out, the LBSO saw students from Oak Primary, Crow Lane Primary and Hepworth Junior School spend the night at the John Smithâ€™s Stadium in a bid to raise awareness of homelessness.Â

In the build-up to the night, the children undertook six weeks of lessons on the topic and learnt more about the Foundationâ€™s work with local food banks.

They then took part in games on the evening, before bedding down for the night in the stadium concourse.

Post-event the children each put together a survival pack or food parcel, which was subsequently donated to Batley Food Bank or the Welcome Centre Huddersfield.

â€œIt was great to be nominated for an award and although we were ultimately unsuccessful, it shows that the work we are doing is having a positive impact in the local community.

â€œWe shall continue to raise awareness around homelessness as it is an important issue in Kirklees, with both the LBSO and Big Sleep Out set to return in 2021!â€

You can watch the event back in full by clicking here.

If you would like to hear more about the Little Big Sleep Out or Big Sleep Out, which occurs annually at the John Smithâ€™s Stadium, please email lisa.bottomley@htafcfoundation.com or call Lisa on 07741671596.